Having Fun with the Backhanded Compliment 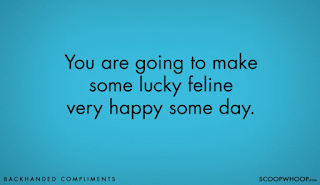 I entered Riding with the Hides of Hell* into the writing contest put on by The BookLife Prize (at $99 a pop) and with every entry comes a critic's report. Entrants are able to use quotes from their reports for publicity if they're properly attributed to The BookLife Prize, which I've faithfully done below.

My overall score was a moderate one, something to be proud of but certainly not enough to brag about. I wish I could rave about my highest points, but unfortunately, they sound like backhanded compliments, leaving it difficult to pull out a good marketing quote. 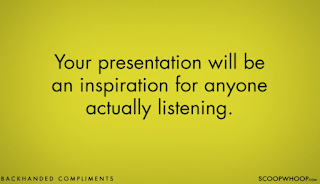 Hello? Is this thing on?

I guess if I wanted good-feels about my book, I should have called my mom!

9/10 for originality:
"At its essence, this book tells a familiar story: two kids finding their places in the world and falling in love. However, Leigh mixes that straightforward YA structure with motorcycle gangs and a fair amount of gender role reversal with the protagonists. And this works to create a book that is anything but standard fare." ~ The BookLife Prize


There ya go! My characters are a bunch of drama queens, but at least the reader gets to root for them to stop being so! Lol.

Now I'm not being sensitive over here, or a Neggie-Nellie, because I know writing is a tough business, and as the saying goes, "This isn't my first rodeo." So I'm having my go at a bit of fun.

On another note, Writer Beware wrote an interesting and fair article about The BookLife Prize and the comments are worth a read, too. I certainly don't begrudge the $99 entrance fee (*cough*) because reading and critiquing is hard work! I know, I've done my "fair share." And I understand why The BookLife Prize words their critiques in a slightly negative way. They can't have their good name splashed on every book! It's the yin and the yang of it.

Click Riding with the Hides of Hell* to read The BookLife Prize's full assessment. 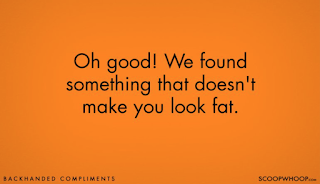 Not that there's anything wrong with that.

* Riding with the Hides of Hell has a new title: Burnout!
SaveSave
SaveSave
Posted by Stacia at 2:59 PM No comments:

Here's my first short story set in the Flathead Valley, called Love on LaSalle. Want a quick zap of love while on the go? Check it out on Wattpad...it's less than 1500 words long. 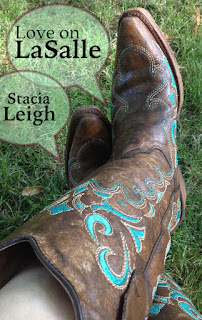 This was an entry for a contest due a month ago, and since there was no rule saying I couldn't share it with the world, I decided to put it out on Wattpad, which was a nice way to figure out the nuts and bolts of that social outlet. Here's the description:

Marcia has resorted to hiding her things in her tiny pull trailer ever since her jerk boyfriend, Nick, has demanded that she throw her stuff away to prove her love. She's better off without him. Then Chase, a free-spirit camper from next door, saunters over with ideas that have her questioning love and second chances.

This is a snapshot into Marcia and Nick's relationship as their love tips on the rails. It's set in an RV park in Montana's Flathead Valley.

This story is about Suzy Blue's parents from Dealing with Blue, when they were young and carefree.
Posted by Stacia at 10:57 PM No comments: