The Public Broadcast System (PBS) created a list called "America's 100 Most-Loved Books" and were asking readers to vote for favorites. I perused their page and counted thirty-eight that I've read, listened to, or even watched and found several that were on my TBR pile. Guess now's as good a time as any to push those to the top for September's Reading Challenge: The PBS Book List 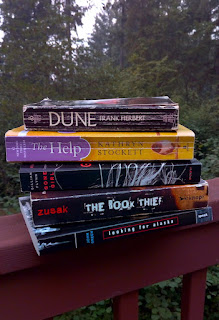 
1.) I'm not much for sci-fi stories, except for the occasional movie, even though we have a shelf full of Le Guin, Asimov, Herbert and more. That's my husband's genre, and he'll cry tears of joy when he sees me open up this book: Dune by Frank Herbert

2.) A librarian friend sent me The Help by Kathryn Stockett* with a note tucked inside. It said, "I thoroughly enjoyed this book."

3.) Lots of people raved about the plot twist in Gone Girl by Gillian Flynn, and even with a movie out and 44,000 reviews on Amazon, I'm still in the dark. Perhaps that will change this month.

4.) The Book Thief by Markus Zusak was referenced frequently at a writing conference I attended a couple years ago as an example of good writing. Color me curious.

5.) I've read two of John Green's books and am hoping I can get through a third. I'm sorry to admit, the struggle is real. Hopefully, Looking for Alaska by John Green will change all that, especially since it's a Printz Award winner, hosting a big gold sticker. *bling-bling*

"So many books, so little time!"
Image from Enchanted Wall Quotes
Posted by Stacia at 11:00 AM No comments:

Busting Out of My Writing Funk

For two and a half years I've been thinking about, making notes on, and writing Book #3. I can't believe it's been so long, and I STILL haven't written the ending. I'm currently three or four chapters from calling it a done draft, but with so many changes and edits weighing on my mind it's hard to push forward. I feel like I don't know what my characters want anymore. I've lost sight of the story and where it needs to go from here.

I consulted the Magic 8 ball on wether I should set the story aside and start something new--but what if I never finish it?--or push, push, push to get it written. It gave me the Reply Hazy routine...again. Then, my neighbor stopped by to see how everything was going and suggested I forget about the manuscript for awhile. Was she telling me what the universe wanted me to know? But I'm so close! Just three measly chapters...

I should be able to do this, right? Yes, because I read You're a Badass, by Jen Sincero, and she said so. Ha!

I've always had a problem with procrastination, being a sloth, and tinkering with a million other projects, that I'm my own worst enemy, getting in the way of my own priorities. After reading, The Road Back to You, an Enneagram Journey to Self-Discovery by Ian Morgan Cron and Suzanne Stabile, I found out my personality type is straight-up a #9, The Peacemaker. Wow. Sort of hard to ignore my bad habits when this book puts them right there on the page in black on white.

I have to prevail! It's in me to finish this thing no matter what people say or what obstacles I put in my own way (a kitchen update, painting shelves, weeding my yard, making up reading challenges, organizing my camper, designing new business cards, blackout poems, and on and on...)

So...here's my latest attempt to keep myself on track: a visual motivator! During the year I'll see how much writing I've been doing, and being a list-maker and a box-checker, I'll be poised and ready with my pink marker. 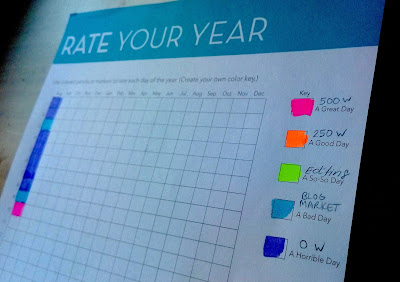 August had a sloth-like start, but the visual motivator is working! I was tired of all the purple squares (zero words written), so I put my butt in the chair and pumped out about five hundred words of crap today, but it's something! It's forward motion. Getting the writing done early in the morning leaves plenty of time for all the other distractions. Now I just need to keep up the good work.

"I don't want to fall back on anything. If I'm going to fall, I want to fall forward." ~ Denzel Washington
Posted by Stacia at 3:25 PM No comments: