Just a quick note, then it's lights out. My goal is to get up at the butt-crack of dawn and beat the southbound traffic to our campground. Me and mornings? We don't get along so well. So...back to the quick part.

I can't go anywhere without my journal and a book or two. I read what I'm in the mood for, so I need to pack plenty of options. 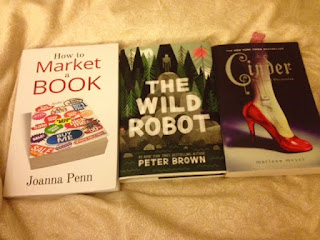 What to Read?
The Chosen Ones

Just give me the facts, man. When I'm in this kind of mood, a good how-to book suits me fine. This time, I'm reading, How to Market a Book by Joanna Penn. I'm not even half way through, and it's loaded with good material. So far, so good.

The end is nigh. I'm reading The Wild Robot by Peter Brown with my kids, and we're a couple short chapters away from scratching it off our to-do list. With a three hour road trip ahead of us, I can finish this bad boy in the car.

It's on my mind. I'm not a big sci-fi or fantasy reader. I'm more interested in characters than I am a new world, BUT, I am enjoying Cinder by Marissa Meyer quite a bit. A cyborg Cinderella? I mean, how cool is that? I have a lot of questions that I need answers to...so if it rains out our campfire, I'll happily dive into my tent with this book and a flashlight.

Now, I need to sleep fast. 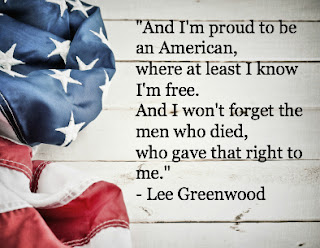 The great thing about taking close-ups while I'm out walking is that, akin to smelling the roses, I have to stop the dogs and really look at something. The terri-hua-huas get impatient, my neighbors think I'm crazy, and I almost missed the kids' bus this morning! I was trying to get the perfect fern shot, then had to run up hill...so...out...of...breath. Gasp! 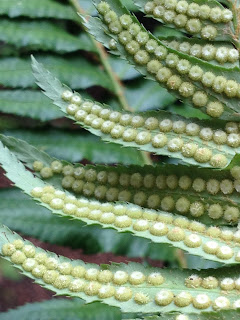 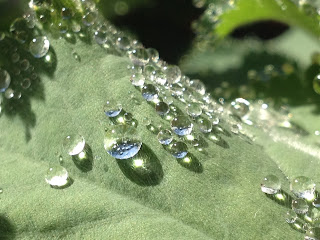 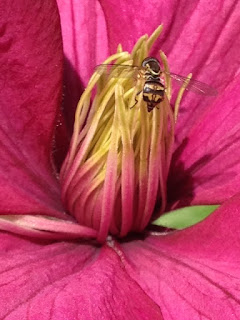 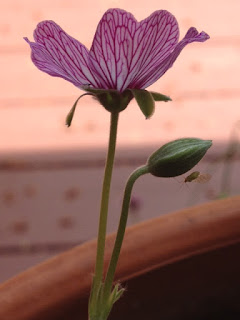 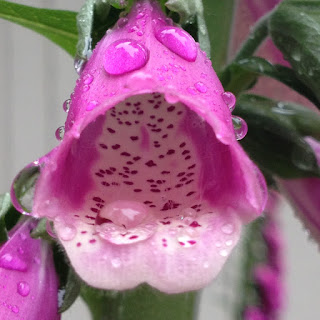 From the Art Docent: Abstract Art

Every year I volunteer to be the art docent in my kids' classroom. There are six, one-hour classes to teach, and the topics are predetermined by PTA. It seems like it should be a no-brainer, but for me, it's a lot of work! 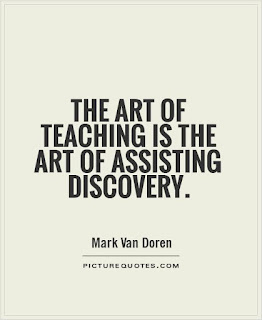 My mind has to "noodle" over the topic in anticipation for about a week. What projects are out there? Which ones best suit the second grade mind set? What should I lecture about? How will I keep their attention? What prep work is involved? Will I need print outs? And so on...

Then I have to gather my supplies, practice the project, tweak it if need be, make notes for the lecture (super short, naturally) and get on Photoshop to fuss with printing.

All that prep work and worry for a short time, then suddenly, it's over, and I'm left with a huge sigh of relief and a sense of accomplishment. The kids had fun, I had fun, and all is right with my world.

Today was class number six, Abstract Art, the last class for the year. I like to explore new mediums, so instead of paint, oil pastels, or glue, I opted for tissue paper. Cool, right? 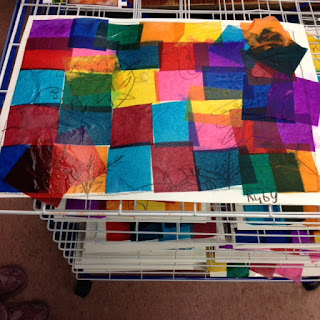 Our lesson came from Teach Kids Art: Underwater Fantasy Inspired by Paul Klee. I had to make some changes since my tissue paper wasn't officially the "bleeding" kind. I added salt to the water (rubbing alcohol works best, but stinks) and instead of using oil pastel, the kids used a dark crayon for their line drawing.

It had to dry, so the next day, the art was unveiled after sweeping the tissue squares away. It was like unwrapping a present! A great way to end the year. 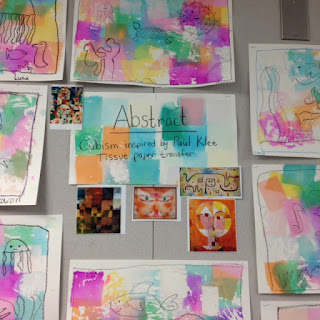 Abstract and Cubism and Paul Klee 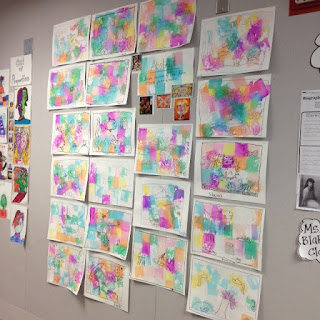 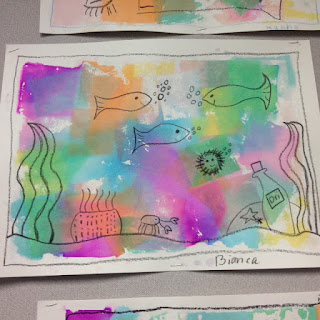 What's in the Fish Tank, Bianca? 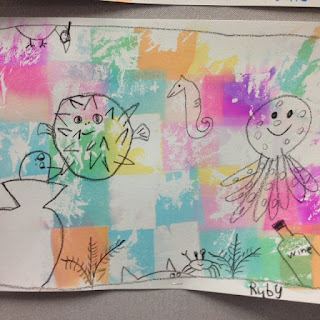 In Ruby's Aquarium
Posted by Stacia at 12:10 PM No comments:

The Editor's Note: Too Many Characters!

So...I get the manuscript review back on Book #2...right? And the editor basically says, "I love the idea and the quality of writing is high." 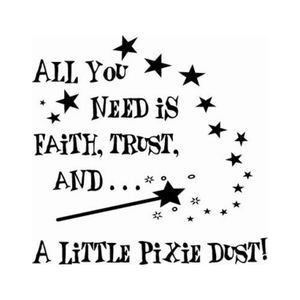 "...you pay me to critique what needs to be reworked."

Yeah, yeah. Stuff needs to be done. I get it. The hardest thing for me to get my mind around is her suggestion that I cut some of my secondary characters. There is no Band Aid for that kind of pain. I'm  writing about a motorcycle club and each character has been molded from the floor up. I know these people! She wants me to cut three club members and whittle my rival villains from four to two.

I'm having a hard time getting my mind wrapped around this since each character has a place and an action in the story. I don't want to dismiss her suggestion out of hand (I paid money for it)...but how many is too many?

2.) I searched the NaNoWriMo forum to see what other advice writers offered and liked what kashmirgirl1976 had to say:

"As long as you can handle them, go for as many as you can. You can always divide them into categories: Major, minor, peripheral... Just make sure they add something. If not, wipe them out."

"You still might [need the characters] for the sake of impact, clues, or other plot element[s] you absolutely can't show another way without having issues."

3.) Set aside a day to read the entire manuscript in one sitting. Create a spreadsheet on where the characters are and what they're up to.

4.) I'll make whatever changes to characters I can...perhaps combining a couple, then have my beta readers give me their input. Did they feel bombarded by the characters? Did they have trouble keeping them straight? No comment?

5.) Go back to reading You are a Badass by Jen Sincero.

"The problem is not the problem. It's your attitude about the problem. Do you understand?" ~ Captain Jack Sparrow in Pirates of the Caribbean
Posted by Stacia at 11:38 AM No comments:

I've decided to get realistic and instead of Friday Fives, I changed the theme to Fabulous Fives. Now, I can post my five favorite things whenever I feel like it, and that works for me :) Loosen the binds of expectations...ahh. 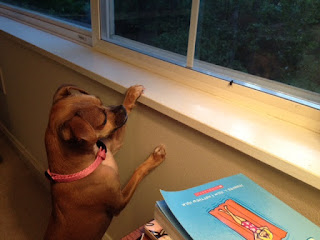 The Bean, The Fly Catcher

This week's Fabulous Fives brought to you by The Bean. Last night, she bounced back and forth on her hind legs along the window sill, tracking a pesky fly. It was cute, it was funny, and the fly met its demise. Awesome. Of course, I had to take a picture and that's when I discovered the photobomb: a stack of comic style books in the corner.

I don't usually lean toward comic books, but after reading a few, I've come to appreciate them. They're quick reads, engaging visually, and when paired with beautiful stories, become winners all around. Reluctant readers as well as reluctant graphic novel readers (moi) will appreciate these:

1.) Smile (or anything by Raina Telgemeier)
Number one on my list! My ultimate fave for a satisfying middle grade story.

2.) El Deafo by Cece Bell
Wonderful story about seeing one's disability in a new light. For the elementary set.

4.) Amulet series by Kazu Kibuishi
I read the first one and adored the artwork. It's an adventure series for elementary ages on up.

I'd like to give a nod to Sunny Side Up by Jennifer and Matthew Holm. It's the book photobombing my picture. A good read for elementary kids living in contrast: the young living with the old, a child acting like a parent, and a big brother who you can't look up to.


"Drawing is putting a line round an idea." ~ Henri Matisse
Posted by Stacia at 9:33 AM 1 comment:

From the Art Docent: In and Out of Proportion

Today, I taught the second graders about proportion in art. Proportion means the size, the location, or the amount of something in relation to another object. What is natural and expected creates a sort of harmony in the image. The parts compliment each other as they make up the whole.

A great example is a human face.

Our brains love to find patterns, and one place it does this on a regular basis, is with facial recognition. The placement and size of the eyes, nose, and mouth help us recognize people we know.

We search out the pattern and can see it in other places, too. 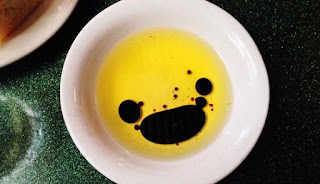 We first explored a face in proportion. It has a lot to do with fractions and symmetry, which the kids are learning about in class. 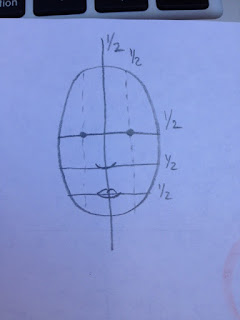 But what does it mean if something is out of proportion? 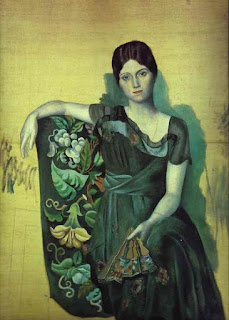 "Portrait of Olga in the Armchair"
1917 by Pablo Picasso

But later, he explored other ways of communicating through his art. He is famous for co-founding the Cubist Art Movement, an idea of rejecting a single point of view. Instead, Picasso chose to show faces from several views, like portrait and profile, at the same time. 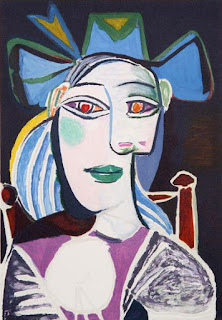 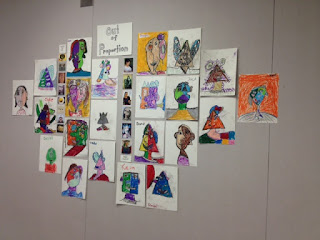 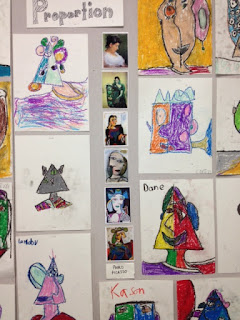 Out of Proportion
Art Inspired by Pablo Picasso

Other cool links I found useful on this topic:

All dressed up to wish the mommies out there a HAPPY DAY, wether it's relaxing alone with a good book and some peace and quiet, or wether it's spending time socializing with the family and fur-babies. 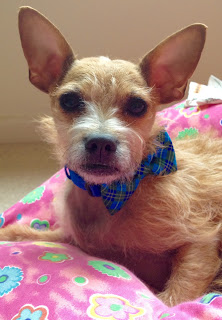 The Rug
"A mother's hug lasts long after she lets go." ~Author unknown 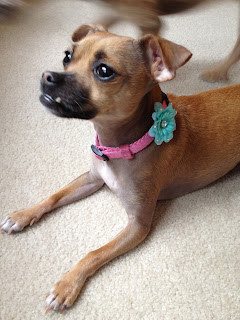 The Bean
"If you are not too long, I'll wait here for you all my life." ~Oscar Wilde

Email ThisBlogThis!Share to TwitterShare to FacebookShare to Pinterest
Labels: Photography

This week a lot of things happened, so I decided to stick with the "currently" theme. Here goes:

1. As far as my writing goes, my second book, which is Will's story, is now in the hands of Bev "Editrix" Rosenbaum, an independent developmental editor. I can't wait to read her notes when she's done since I'm anticipating a rave review with, "It's perfect the way it is! Don't change a thing." LOL. I guess you could say, I might not be emotionally ready for reality. Oh, well. For now, the view from cloud nine is pretty good.

2. I found two very cool things in my garden--I'm a fair-weather gardener, so I get surprised a lot. The first is this cool camouflage-looking moth, which turns out to be a Comstock's Sallow: 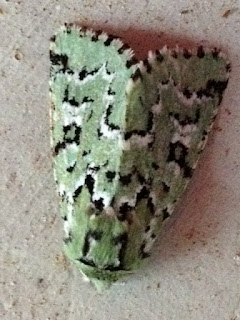 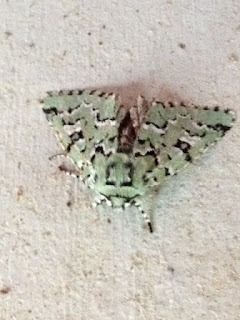 3. Also in my garden, the poppy bud from my previous post bloomed. Boom! Red goodness. This is a rare occurrence since we have deer, rabbits, moles, and other critters that nibble on my greens. 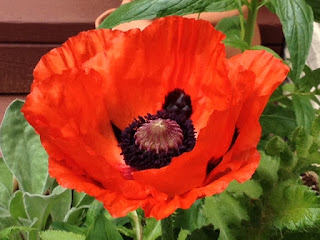 The Flower of Remembrance

4. I like to read multiple books at a time to keep me on my toes. For middle grade, I picked up The Call of the Wild by Jack London. It was l-o-n-g ago when I read it, and I have to say, I'm probably loving it more the second time around. I can appreciate the action, danger, and fast pace. It has truly stood that test of time (it was published in 1903), especially in this digital age where getting into a story needs to be fast and with constant hooks to keep readers engaged. I'm reading a paperback version, which I prefer, and the line illustrations add to the experience. I highly recommend!

5. Writer's research the craziest things when they're finding inspiration for characters or their story plot. Here's a coffee mug picture that says it all: 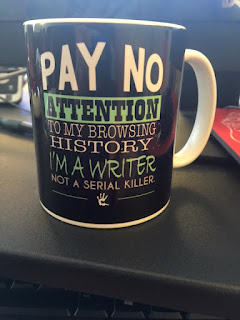 While researching book #2,  I'd written a list of ailments on a sticky note and stuck it to my desk. It read: lacerated spleen, broken arm, concussion. My husband pointed to it and asked, "Should I be worried?" Yes...I mean no. LOL. It's all part of research, my dear. I also looked up food poisoning, the drug Rohypnol, and joined a forum where I could ask a biker anything. Fascinating.

I'm starting book #3 and began wondering about color blindness, or rather, color vision deficiency. If you have it, how does it affect your life? Last night I found a very cool website on this subject called Color Blind Awareness. Pretty interesting stuff out there!
Posted by Stacia at 1:51 PM No comments: