Here we go again, on the brink between All-Hallows Eve and All Saints Day, that place where writers sit poised for the strike of midnight. Once November hits, fingers will fly across the keyboard, adding one word at a time, until there are 50,000 or more. You guessed it...NanoWrimo season.

I'm starting a new book in a new genre: YA fantasy. I've got my title and cover all sorted out because The Nano-ists say having a good, solid start is key to staying motivated. True. I want to see this thing done! It's been on my mind for a year, and now I'm pushing a lumpy, old project to the side in favor of something exciting where cell phones in a contemporary world won't get in my way, only sea monsters and a brackish king... 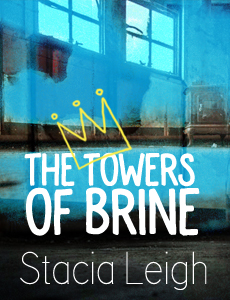 
This year's official Nanowrimo banner is cute, and I would have used it if I didn't already have one. But part of my "get motivated" event prep is to create a banner. This time I was inspired by my blackout poem called, Love Connection. It's the cover image of a compilation I'm going to publish soon. More on that later!

For now, focus! And good luck to all the participating writers out there.
Posted by Stacia at 1:18 PM No comments: