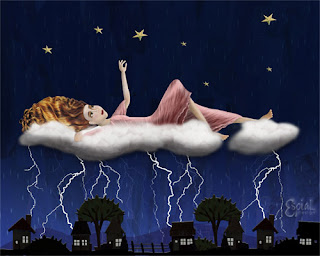 Originally I named this piece, My Own Place, but decided to change it to Alioth's Star since that is the name of the star about to be plucked from the sky within the Big Dipper.

Here are some interesting links relating to constellations:

If you want some real facts before purchasing, click here.

The Big Dipper (or Plough, the British name) is a small star group within the Ursa Major or The Big Bear. The names of the stars in the Big Dipper are: Alkaid, Mizar, Alioth, Megrez, Phecda, Merak, and Dubhe.

Wow, I missed this one. It's electric!! A really interesting take on the topic. Great original idea.

Excellent illustration and thanks for the naming of the stars!