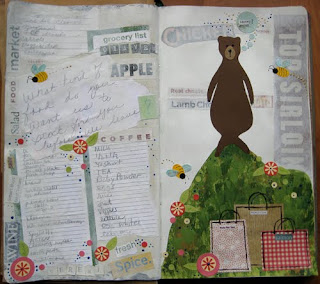 I've been saving my grocery lists especially for a project in my altered book. One grocery list was written by my mom and on the backside was a note she'd written to communicate to my VERY hard of hearing uncle. We'd been visiting him in Montana and wanted to make sure he had a stocked pantry before we left for home.

I glued the lists on first, then collaged additional food words cut from magazines to fill in the negative space. To blend it, I used a roller brush and rolled on a thin layer of white acrylic paint, wiping it even thinner in strategic places for readability. 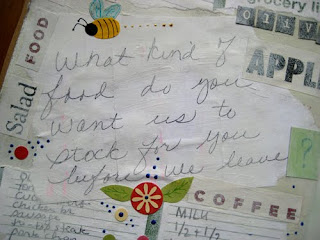 I was rather stumped for an image. First thing I thought of was a fairy flying with a grocery cart. I reached for my bookshelf and found inspiration in a collage book by Claudine Hellmuth. I used her idea for the outlined grocery bags and immediately thought of a bear when I reread my Mom's note...while in Montana a friend and I had visited Glacier Park and the pamphlets saying, "Don't feed the bears" came forth in my mind for this image. 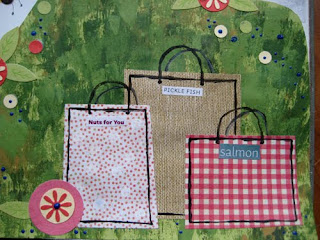