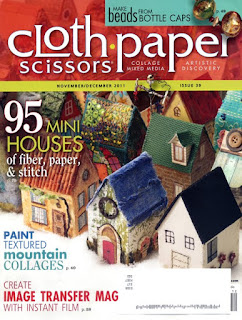 I received a nice surprise in my mailbox today...a magazine sporting my work! Not just any old magazine, but Cloth Paper Scissors, a resource for collage, mixed media, and artistic discovery. This is the second time my art work has been selected as a finalist and printed in the Cloth Paper Scissors magazine.

I wasn't quite sure that my work would be chosen. When I initially checked the roster to see if my name was selected as a finalist for the "Home Sweet Home" challenge, it was not. Later, right before the due date to mail in the work, I received an email saying there had been a glitch and several names had not appeared on the list, mine being one of them.

I had entered two houses and it wasn't clear if they wanted both or just one. So I emailed the editor and she wrote back, "The yellow one." There wasn't a yellow one. There was one white house and one green house...so I mailed them both, thinking that there must be a mix up and they had emailed the wrong person all together.

But, a nice surprise for me today, to find the green house in print for the November/December 2011 issue. 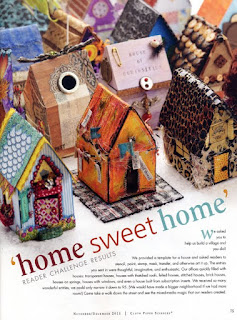 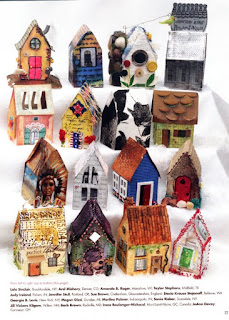 My first entry printed was my Deux Pois Bakery confections, a winner for the "All Buttoned Up" challenge back in March/April 2011.
Posted by Stacia at 9:41 PM