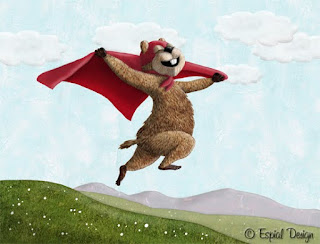 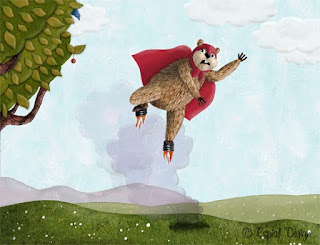 Still working it, right up to the deadline. I just finished updating two of my three illustrations for my Super Phil series. He's a groundhog that loves adventure and innovation. He wants to be a super hero, and starts off with a red cape and mask.

Then, he invents his own rocket boots in hopes of flying high enough to pick the cherries from the neighboring tree. By the time he's done fine tuning his rocket boots, there is only one cherry left and some serious competition.

The third image is my robot image and it's next in line. Mere days left before my portfolio is due to display at the SCBWI Western Washington Annual Conference.