The Mission: offer a craft that's quick, easy, uses very little glue and no paint. The craft needed to be completed and sent home immediately after the event.

To save on time and explanation, I pre-cut and pre-scored the pieces. I bought stickers (eyeballs, glasses, and mustaches), and provided glue sticks and scissors. Boom. Let's do this thing. 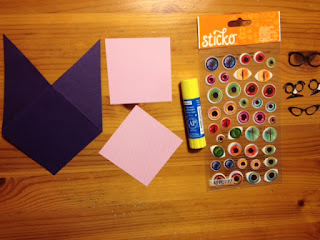 The purple card stock pattern is based on a 3x3" square. The pink paper squares are just slightly smaller. The only thing missing in my picture above is a pair of scissors and a Sharpie pen.

1.) Fold triangles flaps in and crease.
2.) Open flaps back up and glue one pink square on the purple card stock.
3.) Cut the remaining pink square in half diagonally, forming two triangles.
4.) Use one triangle to cut out some monster teeth, assuming the back of the paper is white.
5.) Fold the purple flap, glue teeth onto the top, then cover flap with glue. Fold second purple flap down, adhering to the top (teeth should be in between the layers).
6.) Glue remaining pink triangle on top of flap. 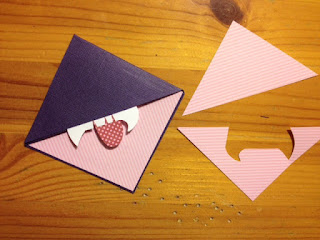 That's a tongue, by the way.

7.) Add stickers of eyeballs, glasses, and/or mustaches. The stickers I used by Sticko were foam padded stickers. Colorful cushions that won't damage the book's page. After it's all said and done, use a Sharpie pen for eyebrows, nostrils and other details. 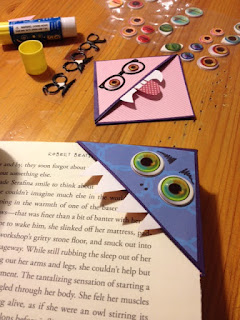 For a great tutorial, check out Tally's Treasury blog on how to make the corner bookmark along with creating the pattern.
Posted by Stacia at 8:26 PM