What the Font, Man?

I'm currently working away at a second edition of my debut book, Dealing with Blue. It's my first self-published book, so let's just say...mistakes were made. But it's the way I learn...hands on. Now, I've got some fixing to do.

I'd played it safe, using the serif font Times New Roman in 12-point for the interior body text. When I published it, I thought the font was a bit on the large side. After doing some research and comparing it to other books, I discovered that using Times New Roman was frowned upon in general. Oh, boy. Here we go.

One sign of an amateur look is crappy interior design:


"Use a font besides Times New Roman, Arial, or Helvetica. Don’t go crazy with a fancy font, but show a little style." ~ Guy Kawasaki of Digital Book World


Here are a few of the resources I perused for "best font" with regards to self publishing:

Now, I had to choose. Which font from the short list above was the best option for Dealing with Blue, a young adult romance? At first, the decision didn't seem obvious, but after I experimented with the formatting, the choices started to fall away. Here's the break down:

5. Caslon, and the rest mentioned after, weren't available on my Mac. Boom. Moving on...

3. Palatino was okay but was also on the large side. 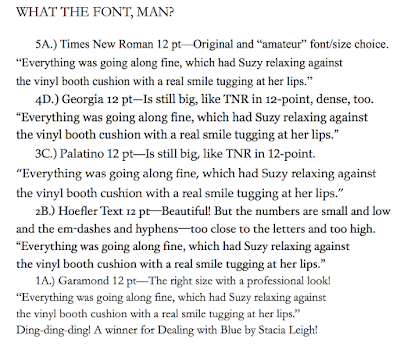 2. Hoefler Text was beautiful! I loved the look until I realized the hyphens and em-dashes were too high and interfered with letters like "r" and "f." I would have had to alter the baseline shift in each instance. Okay...maybe it was an option. But then add in the numbers...small and low. The chapter headings looked funny. I opted to pass for the sake of my sanity and ease with formatting.

1. Garamond turned out to be the winner. All around no fuss-no muss. Easy formatting, looks professional, easy on the eyes, and on the top of everyone's list as a text favorite. Works for me. 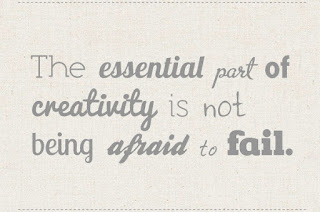 "The essential part of creativity is not being afraid to fail," some brilliant person said.