I learned on Facebook that putting coconut oil into coffee is a thing. I like coconut, and I like coffee, so why not? After adding a dollop and stirring, I took a sip. Then a face appeared. It said, "Don't do that again." 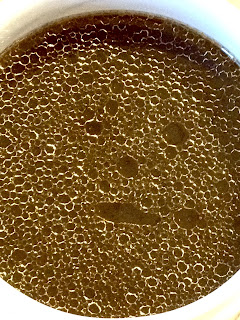 It's a lot like glossing your lips while drinking black coffee. The first part is a mixture of strange and curious, the second part just plain bitter. I'll stick with my fat of choice, half and half, and a smidgen of honey.


"Just a spoonful of sugar helps the medicine go down
in a most delightful way." ~ Julie Andrews in Mary Poppins
Posted by Stacia at 9:58 AM

Email ThisBlogThis!Share to TwitterShare to FacebookShare to Pinterest
Labels: Photography