Welcome, bouncing baby book! Riding with the Hides of Hell has been born.

It's done. The scrub and polish, the fresh cover, a succinct back blurb...finally, it's done. (whimpers) 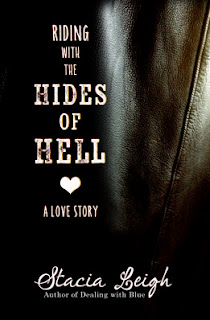 Riding with the Hides of Hell* A Love Story

Now, why don't you head over to Kindle Scout and give it a gander? I'd appreciate a nomination, although I don't really know if it matters...but, hell! I'm game. It's available from September 9 through October 9 until midnight. If Amazon Publishing doesn't pick it up, then it will be independently published and available after that date.

Here's the back blurb I painfully eked out:

"It's always trouble with you."
Will Sullivan, sixteen, lost his mom in a tragic accident one year ago and has turned to drinking and driving, which lands him in the hospital, lucky to be alive. Enter his dad’s “brothers” from the Hides of Hell Motorcycle Club, a motley group Will used to consider family. They’ve got big ideas about biker therapy, and Will remaining in his comfort zone isn’t one of ‘em. Get ready to ride. Unfortunately, Will is teamed up with the prez’s daughter, the troublesome Miki, and playing passenger on her bike, holding onto her at every curve, is gearing up to be the ultimate nightmare.

"Hop on!"
Miki Holtz isn’t some bubblegum chewing high schooler who only cares about her blue hair and the chips in her pink nails. She wants to be a mechanic, to fit into her dad’s way of life, and to make a love connection with her soul crush, Will Sullivan. Yeah, her speed is fast, and his is slow. She’s a mover and a shaker while he’s oddly attached to his peach floral couch. But things are about to change.  She might be riding the tail pipes of the pack, but she’ll be on her bike, her wheels. Will had better hang on, and the tighter the better. Boom, boom. Hell, yeah!

"I don't like the way you like me."
However, the ride gets off to a tenuous start when one bad decision follows another, and a rival club takes notice from the shadows. Nothing good will come of it. Boom, boom.


Riding with the Hides of Hell*: A Love Story is a gritty young adult romance set in fictional towns peppered throughout the Pacific Northwest. It’s about a strong girl and a moody grump finding love on a road trip from hell.


* Riding with the Hides of Hell has a new title: Burnout!
Posted by Stacia at 9:21 PM